Washington City. The New Orleans Cretcnl has a very interesting article on the topography of the country a'ound W.i-bing:on City. It will instructive to those not familiar with bxntion described, and which are ex to I e vinie so soon the theatre of stirring and bloody deeds. From present appearances, ay the Creent chances are that the big fight between the Abolitionist and the Southern patnots will take place at, or near, ashingion city. As there may be some our readers who have never visited the Federal Capital, we promise to give some account of its position and surroundings. Washington is situated on the North of the Potomac, about 150 miles it mouth. A small creek separates Wa-hington from Georgetown, but as citiiw are closely built up to the line, are virtually one. Directly ophite Georgetown, across the Potomac, are the Arlington Heights. Arlington was the residence of the la'c George Washington Parke Cujtis, win died a few years ago. leaving the property to his son-in-law, Col. Robert E. Lee, ol the Second Cavalry. heights of Arlington are, we fiupjxise. about one hundred feet aliove the usual water mark of the Potomac. It is celebrated for, a big spring of cool and delicious water, and is much resorted to in summer time by pic-tiic parties from Washington and Georgetown. The distance from Arlington acros9 to Georgetown is, we should say, about one mile. From Arlington to the White House il is two miles or more, and to the CapiUl about three miles. Batteries on Arlington Height, might easily command President' House and shell Old Abe ont, scarcely allowing him time to put oh that famous Scrtch cap and long military cloak Jierewith he first sheaked into his Capitol. But our forces can, if necessary, ap proach nearer to Washington than Arling ton. There is an i.-laml in the Potomac, called ILii-on's Island, opposite Georgetown, and lying nearest the Virginia side, connecting with the main land by abridge. We can easily get on that island and throw up batteries. Georgetown is directly opposite, not much more than a quarter of a mile distant. An aqueduct, bringing the Chesapeake and Ohio canal across from Georgetown to the Virginia side, serves as a bridge, Jn which our troop could cross if they wished to make an assault. Guns of the heaviest ctlibre can be easily gotten to Arlington Heights, and, without much trouble, to Mason's Island also. Two or three railroadj, connecting with Richmond and other points, mn into Alexandria, which is six miles below Washington, on the Virginia side. From Alexandria, guns and niunitioi can be carried by the Chea-ajieuke and Ohio canal directly up to Mason s Island. The Capitol is not fo easily commanded. That is a mile lower down the river than the President's House, and opio-site the Capitol the river is a mile wide. Then the Capitol is more thau a mile from the river. If we had batteries on the Virginia shore, opposite the Capitol, we might reach that building, but we will very likely have con-i.lerable trouble in planting our batteries there. But we Can plant b&amp;tu-iie on Arlington Heights without being in rang- of the. euemj ' guti", unless the Abolitionists cross the river and give us a hanu-tohand light. Wa-hiugtoii is defended against any hosiiie approach, by Way ol the river, by a tortih.-ati.in aooul twenty nines i low, called Fott Washington. This fort is on the Maryland side, at a bend iii the river, auu coininaiiU.s me appaoacnes uoiu aoove and IwloW. Its regular airim.n is four bundled men. and it mounts eighty-eight guns. The Marjlanders ought, to storm and Like this lort withoutany delay. Then Old Abe couldn't get any more troops to Washington at all. Resides this, there is an arsenal at Green leaf ' Point, the lower end ol Wash ington City, where the Eastern Branch empties into the Potomac. This is an ex tensive arsenal, not only upplicd with small irnis, but big gnus. Several puns tbatwe bave f .ptured at Vk tow n, Saratoga, Vera Cruz, vtc, aie tbert. It w.ll be curious if thee guns, that we seized from a foreign enemy, should now b turned uxin us by the Abolitionists. We almo-l believe that they would refute to fire. The report yesterday was that the Virginians are concon t rating in l.irge numbers, and eatalili-hirig a mili'ary camp at Acquis Creek. The telegraph says that Acqitia is twenty dnpr miles below Washington. Thi shows bow great a liar the telegraph is. It is tixty mile from Washington, instead ol twenty-four. It is a tei minus of a railroad horn Richmond, seventy miles otH The Virginians can establish batteries there, ml command the channel of the river. Having dono thai, they will then, after leaving enough rfnldier to man the batteries, march across thirty miles to th. Orange ,and Alexandria road, which will put them down witiitua mile of Arlington Heights. The Baltimore-and tihio railroad, connecting Baltimore ar.d Wadiington,having refused to transport Abolition troaps, the idea now is to land them at Annapolis and mnrch across. But the Mary landers are concentrating along the road to dispute their passage. II the Virginian then can stop troops from going up the Potomac, Old Abe's supplies of soldiers w ill ke cut off. If those he now Laa in Washington do not fight better tbaji they did in Baltimore, where they run lik. dogs before a crowd firmed only wfth brickbats and paving stones, Beauregard will bwean easy jobol it in driyjng Old Al out. He bad betlerdon that cap and cloak atence, and run whrlo "times are good." That request of Beauregard, that the women and children be removed Irom Waafcing-ten, looks like ' business." TV , , and K in 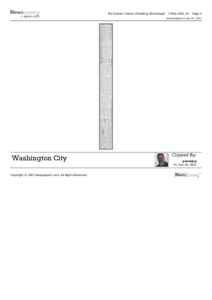