Another Engagement at Mathias Point

Another Engagement at Mathias Point

The death of Captain Ward of the Freeborn, Commander of the U.S. Potomac Flotilla

ANOTHER ENGAGEMENT AT MATHIAS POINT. I r?p? W? d, i| the Frerktra, Ctaaiader t the C. 8. PeUaiac Fletiila, Killed! The Pawne? arrived up to the Narj Yard at 9am. to d*y, bringing the dead body of Capt WnpH nf th* Frpphnrn who waa v#at#r. day In an engagement with the Confederate troppa at Matthlaa' point. It appeara that tbe Freeborn waa off tbe Point recoanoiterin^, and dia^overrff indication* of a movement for the erection of a battery at that Point by the rebel aoldlera encamped near there, and on the night before laat Capt Ward aent up to the Pawnee at Aqula Creek for Capt. Owena to tend him a reinforcement of two boat'a crewa to aaalit in effecting a landing. Two amail cutI tpf'l rr?Vt wpr# i#nt A nwa /* IK? WVaaKArn ?? - der Lieut Chaplain, and with them and a boat's crew from the Freeborn, numbering from thirty to forty men In all, Lieut. Chaplain yesterday morning effected a landing, and succeeded in driving in the rebel pickets. Finding preparations for tbe erection of a rebel battery there, it was determined to throw up breast works and mount guns thereon to give the enemy a warm reception should they attack the crews Accordingly the men were set to work under cover of tbe Freeborn's guns at throwing up a and bag breastwork, and succeeded In working four houri and a half, and got their work* about five In the evening They then went to the boats to go on board for guns t) mount on the work, when juat ua they were embarking they were surprised by the rebela, estimated at from one thousand to flftteen hundred strong, who poured in a hesvy and continuous Are of musketry upon them from the bushes near by. Under cover of tb? guns of the Freeborn, the crews precipitately made for the steamer, leaving a few of the men on shore, the guns of the Free born meanwhile opening with activity and pre cision apparently upon tue enemy, wbo were bv tbe underbrush. Some ten shell were thrown among them, with what effect could not b? aeen, owing to the poattlon of the enemy, is above explained. Captain .Vard behaved with great coolness, standing by tbe guns and directing tbe fire When his gunner received a wound In the thlgb, which disabled him, Capt Ward Immediately took bis place, and was sighting the gun when he received a Minnie musket ball full in the brea?t, which killed him almost Instantly. The men le t on the shore bv the boats in their retreat, awam out to the Freeborn?one of the men carrying on hit back a wounded comrade, named Hess. who bad four musket balls shot into him, and li thought to he mortally wounded. Jack Williams, coxswain of the third cutter, received a flesh wound la tbe leg while waving the stars and stripes, which he carried in his hand she wbole time, behtving most gallantly under the bo test kind of a lire. The American ensign. wLich he never ceusd to wave, was pieretd with nineteen musket balls. Only three men of the boats were wounded, and the only life lost was that of tbe gallant Ward, who, the moment th? enemy was discovered, blew the signal for tbe crews to come aboard, and Instantly opened on the foe wl'.h bis heavy guns. While the crews were engaged on the a slave, belonging to Dr. Hooa, approached the shore witn a white shirt on a pnle, and got aboard the Freeborn, and informed Capt. Ward that the enetny were In the underbrush nearby one thousand strong. Still the work was and made ready, as the event has turned, for the rebels to occupy with guns which they have probably mounted there ere this time. The body of Capt. Ward was placed on board ihe " Reliance," and conveye 1 up to Aqula Creek and transferred to the Pawnee. On the arrival of me inner ai me navy Yard, several companies of the Seventy First Regiment were ordrred out to receive the remains, and escorted them to the yard engine house, (which was draped with the of mourning,) where they were laid out In state, wrapped In the American ensign. The body was followed to the engine house by the officers of tt?e Pawnee, the officers of the Yard, and the boats crew which had participated In the tUe band of the Seventy-First playing a solemn dirge. The remains will be conveyed to N'?w York this evening. f ? i*iit&lt;11AK1 I SLE'-EAl'il, I Navy Yard, Washington, June 28, 1&amp;61. J Secrttiry of tkt Nary : With deep regret I announce the death of Capt. Jame- H Ward. He waa killed yacterday while attempting to cover a landing on Matthiaa Point. A muakrt ball (truck him as ho waa sighting his 3^-pounder. I await orders as to the disposition of the body of this gallant officer John A Dalhgkb*. Commanding Navy Yard, Washington 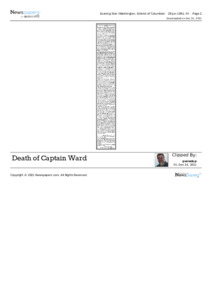